“A journey through some of my great gardens” 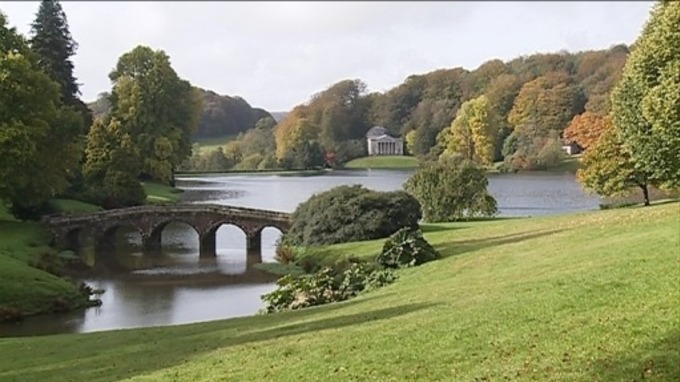 Alan Power is truly fortunate to be in a job that he loves and gets paid for.  He made this clear several times in this brilliant lecture which, in some ways, was his autobiography.

He always loved the outdoor life and this is shared by his family.  The image of his two year old son running into the garden, in wellies and nappy, was endearing. A future head gardener in the making?

The great gardens included Mount Stewart in Northern Ireland, Hidcote, Bodnant, Powis Castle and of course, Stourhead.  His photographs of these gardens, taken at different times of the year, were outstanding and filled the large screen at Bluecoat.

Alan’s work is not just confined to being an estate manager and head gardener but includes a lot of broadcasting. He has appeared on ‘Gardener’s World’ and he makes regular podcasts for the National Trust, several of which can be found on the Trust website.  Try this link:    Listen to our garden podcasts.

“History with Dividends – The Story of the Co-op”

Ned Williams began his talk by asking if anyone knew their dividend number. Surprisingly quite a few responded.  Ned knew by this test that he had an interested audience.  He took us through the history of the Co-op from its conception as ‘The Rochdale Society of Equitable Pioneers’, in 1844, to the present day. In the early days the ‘divi’ was worked out by a laborious system of counting and sorting receipts. (No computers then!). This often resulted in mistakes and arguments with customers.

His slides were fascinating and showed just how society has changed over the years.  He had gone to great lengths to acquire some of the photographs, many of which were taken in the Walsall area.  In fact, at one time, the Co-op was very strong in Walsall.  Ned’s extensive knowledge, easy delivery and sense of humour made this a memorable afternoon.

“Nicholas Hilliard and The Art of the Miniature”

Dr Gillian White started this fascinating talk by informing us that the word miniature in this context does not mean small but comes from the Latin miniare meaning to decorate with small images.  The idea of the miniature developed from the circular illustrations in manuscripts.  They were painted using watercolours usually on vellum and then mounted on card. Often playing cards were used.  Hilliard was a goldsmith and limner (painter of miniatures) who apprenticed himself to the Queen’s jeweller, Robert Brandon, and who painted many miniatures of Elizabeth I.

Gillian’s slides of the gold lockets, encrusted with jewels were incredible. Hilliard was mainly responsible for the paintings they contained.  The photographs showed incredible details in, for example, a two inch painting which did not suffer when enlarged on our ten foot high screen

We are fortunate that Nicholas also recorded his views on the techniques that he used.  Cleanliness was essential and the artist’s clothing should  be silk to avoid loose particles in the air.

Although he mostly painted small oval miniatures, he also created some larger “cabinet miniatures”, up to about ten inches tall, and at least two famous half-length panel portraits of Elizabeth. He enjoyed continuing success as an artist for forty-five years but had financial troubles, mainly because Elizabeth was not very good at paying the bills!

Disraeli, the most unlikely British Prime Minister, his wife, Mary Ann, and their home.

Richard Nokes travelled from Hughenden Manor in Buckinghamshire to tell us about the house’s most eminent occupant, Benjamin Disraeli.  He described him as a most flamboyant character in both dress and personality who was good in the company of women but not so good with money.  He accrued huge debts, but was saved from bankruptcy because of his parliamentary status.  However his financial situation was eased by marrying Mary Anne Lewis, a wealthy woman.

Disraeli’s first speech in the House of Commons, delivered wearing a canary waistcoat, did not go down well but he progressed to becoming Chancellor several times before becoming Prime Minister in 1868.

Richard developed his talk by describing the relationships with Gladstone and also with Queen Victoria.  Disraeli flattered the queen.  He said, “When it comes to royalty, lay it on with a trowel.”

Find out more about Hughenden Manor on the National Trust Website

The Peruvian Andes and the Inca Trail

David Muntzer took us on a fascinating journey from Lima to Machu Picchu, along the Inca trail.  He started by explaining the geology which created the Andes and the many volcanoes in the mountain range. We were told how the original migrants were from Asia.  The Spanish, under Pizarro, conquered the country and captured the Inca chief, Atahualpa.  David’s talk included some excellent photographs of the wildlife including condors, turkey vultures, vicuna, llama and alpaca.

One of the most intriguing parts of this lecture were the slides showing drawings carved in the desert known as the “Nasca lines”.  These depicted animals such as a dog, a monkey and a humming bird measuring 97 metres.  They can only be truly appreciated from the air.

David reached Machu Picchu even though he was suffering from altitude sickness.  The buildings were constructed of dry stone walls and the placing of the stones was so clever that after an earthquake they would fall back to their position.  David constantly mentioned his companion Nick, a retired G.P. who at the age of 64, climbed 1000 feet up the sugar loaf mountain to take an ariel photograph of Machu Picchu. David has a relaxed manner and a good sense of humour, making him very easy to listen to.

“The Back to Back Houses in Birmingham” 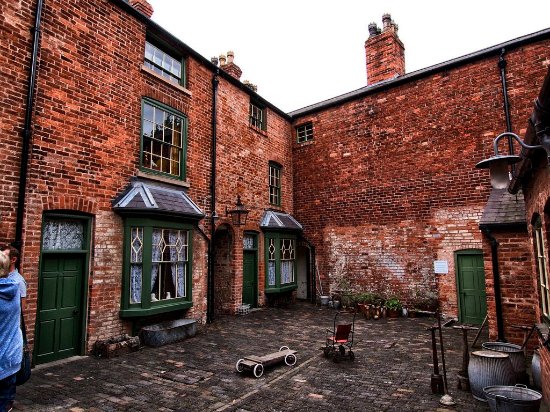 Clive Katz, a National Trust volunteer and guide, related the history of Court 15 with a particular focus on four families from different times who inhabited some of the houses.  In the 1960s most of the back to back houses were bulldozed and the residents rehoused but Court 15 was rescued by Birmingham Conservation Trust and then the National Trust.  Clive’s photograph of the houses in 1990 showed derelict buildings and made us realize the immense task which faced the restorers.

The courtyard contained the brew house, where the washing was done, and the “privies”.  There was no running water and no sewers.  Effluent was collected by the night soil man and taken outside the city to a place which became known as Soil Hill and later as Solihull.

Birmingham attracted may workers during the industrial revolution.  In the early 19th C, House No. 1 was occupied by the Levy family who moved from London and were clock-hand makers.  House No 2, in the late 19th C, was home to the Oldfield family. Herbert and his wife lived with their ten children and two lodgers. He was a glass worker, producing glass eyes for dolls, stuffed animals and humans.

In House No. 3, George Mitchell, a bachelor, lived there in the 1930s. He was the first of many Mitchells to live there.  George Saunders was the occupier of No. 57 Hurst Street in the late 1970s. George was born in the West Indies and emigrated to Birmingham where he opened his bespoke-tailors shop in the Court in 1977 and continued trading until 2001.

Clive’s talk used both slides and recordings to give us a great insight into the hardships of life in the past.

What an entrance Max made dressed in a full set of gleaming armour.  As he removed the breastplate and helmet, he explained how uncomfortable it would have been in battle.  He then talked about some of the weapons used and demonstrated a particularly nasty weapon which could have inflicted a fatal blow to King Richard.

Max Keen does many historical talks and in most cases he takes a particular point of view.  He backs this view with excellent knowledge based on a great deal of research.  In this talk, he takes the view that Richard was not the murderer of the ‘princes in the tower’ and was an intelligent and capable monarch.

In the first part of the lecture Max gave us a detailed history of the Wars of the Roses.  He related the causes and picked out the main areas of conflict.  He vividly described battles fought in snow, one in thick fog and some where the loss of life was devastating. His clear, colourful slides fitted seamlessly into his narrative.

After the break, Max passionately expressed his view that Richard was not the evil king as portrayed by Shakespeare and others.  He supported his view with facts, backed by research, and was very convincing.  This excellent talk looked and sounded very professional and was very well received by our members.

“Shackleton – through endurance we conquer”

Such is the reputation of Andrew Lound, that 116 people turned up for his presentation about Sir Ernest Shackleton and I suspect no one was disappointed.  As usual this featured a multi-media approach with music, voice recordings and wonderful slides.  The photographs were particularly impressive.  Taken in the early twentieth century on plates, they were clear and artistic.  They were an important record of the polar expedition against a sculptured ice landscape.  The one of the stranded Endurance with rigging covered in ice would surely win a photographic prize today.

Andrew explored Shackleton’s uneasy relationship with Robert Falcon Scott. The main difference in their leadership qualities was the former’s ability to develop team-work. His insistence on working as a member of a team, with everyone valued, was a constant theme throughout this talk.

The main focus of this presentation then became the attempt to cross the Antarctic from sea to sea via the pole. (1914 – 17)  Disaster struck this expedition when its ship, Endurance, became trapped in pack ice and was slowly crushed.  Would they survive?  Andrew cleverly built the tension until at the interval we were desperate to know more.  The rest of the story, including a 750 mile struggle in a lifeboat through stormy seas, was a tale of heroism, bravery and determination to survive.  Shackleton promised his team that they would not die and none did.

All this happened while the world was at war.

“Voices from the Lakes”

On Wednesday 22nd January we were delighted to welcome back a speaker who has visited us on numerous occasions, this time to talk to us on “Voices from the Lakes” Ray Sturdy entertained us with a two part session. Firstly he spoke to us about his own personal relationship with the Lakes spanning a long number of decades of walking, climbing and exploring key visitor attractions and then, in the second half, we had slides which illustrated the changing seasons in the area. Ray’s enthusiasm was infectious and the talk was warmly appreciated by the members.

Our talk on Wednesday 12th February took us to places very far from Walsall to see evidence of a completely different way of life on the Hebridean Islands. Roger Butler had been visiting the islands since the age of 12, when he first camped there as a scout. We learned about the flora, fauna, geography and geology of the islands, some of which had very small communities living a simple life and some of which had been abandoned or were uninhabitable. Particularly interesting was to know that the St Kilda people were not fishermen, in spite of the proximity of the sea, but existed on a diet of seabirds and birds’ eggs. The talk also featured some fabulous views of sunsets, changing weather and wonderful sandy beaches. A lovely evening for the depths of Winter.

● A great start to the new year with Andrew Lound"s superb presentation.

● Read about our latest social event. Click on the image.

● Last year we had several cancellations for the coach outings, which has resulted in a cost to the WNTA. As a result, the committee decided that in the future there will be no refunds unless we have a waiting list.
● Pick up points are now Aldridge Community Centre (free parking) and St. Martin’s Church, Sutton Road (£1 parking fee).