● Our Donations to National Trust Properties in 2019

At present Moseley Old Hall and gardens are closed.  Please check their website for further news.

Colonel Nicholas Devereux’s Regiment is coming to Moseley Old Hall with an authentic re-enactment of military life during the Civil War. Supported by camp cooks and their very own surgeon, they will be training and drilling all day from 10am to 4pm, with special displays at 1.30pm and 3pm. Devereux’s pride themselves on their efforts to make the regiment one of the more ‘progressive’ re-enactment groups within the Civil War period.

As a result, the regiment has a deserved reputation for high standards of authenticity and research, and is rightly regarded by many as one of the foremost groups that depict a typical infantry regiment from the 1640s.  Why not go along and find out what it was like to live in a time of war, when brother fought against brother, and people weren’t given a choice about which side to be on.  Activities will be taking place all day in the Farmyard, middle field and the meadow. Living history camp and displays will be in the middle field. This event is free, but normal admission charges apply for the venue.

Our Donations to National Trust Properties in 2019

Birmingham Back to Backs  £500

The National Trust is continuing its focus on remarkable women by keeping displays at Baddesley for another year.  Perhaps the most interesting of these women is Anne Vaux who has connections to the Gunpowder Plot in 1605.  Anne was a loyal Catholic who was determined to keep her faith alive in the reigns of Elizabeth I and James I when there was much religious unrest.  In 1585, an act was passed making it a capital offence to be, or even to harbour, a priest in England.

Vaux was particularly devoted to Father Henry Garnet, a Jesuit priest who was later executed for his role in the plot. It became her vocation to keep Garnet alive and active in the field. She and her older sister, Eleanor Brooksby, rented various safe houses, where Garnet received priests in need of guidance. Baddesley Clinton was one of these safe houses. Its owner, Henry Ferrers, was working in London and rented his home to Anne and her sister Eleanor in 1588.

There was a raid at Baddesley in 1591, which Garnet recorded in some detail. There were seven priests in the house when the Queen’s agents, the “pursuivants”, 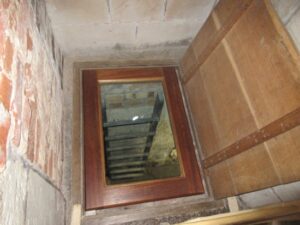 turned up and demanded to speak to the mistress. All evidence was removed and the priests hid in a priests’ hole under the garderobe.

When all was clear, Anne opened the doors and subjected the Queen’s men to a barrage of outrage:

“Do you think it right and proper that you should be admitted to a widow’s house before she or her servants or children are out of bed? Why this lack of good manners? Why come so early? Why keep coming to my house in this hostile manner?”

The pursuivants proceeded with the search, turning each room upside down but finding nothing.  The raid lasted for four hours, the priests standing ankle-deep in water as the searchers tore through the house above them. Only after breakfast and a bribe did they leave.

For the full story and to discover more about the other women featured at Baddesley, please visit the National Trust Website.

Geoff has kindly given us permission to use his artwork for our Spring 2019 Newsletter cover.  It is a detail from one of his jigsaw designs. Geoff has visited us on two occasions.  Once to tell us about his work as a professional artist, and once to tell us of his dislike of mistakes of all kinds!  He made us laugh both times.  He would be welcome to come back to talk to us about his books (oh, yes, he is a published author as well), especially the ones chronicling the life and adventures of David Day (loosely autobiographical).  We have suggested this to him and he may come up with some ideas. Watch this space! If you wish to discover more about his work, click on this link to his website.  Geoff Tristram: Artist, Cartoonist, Comedy Writer 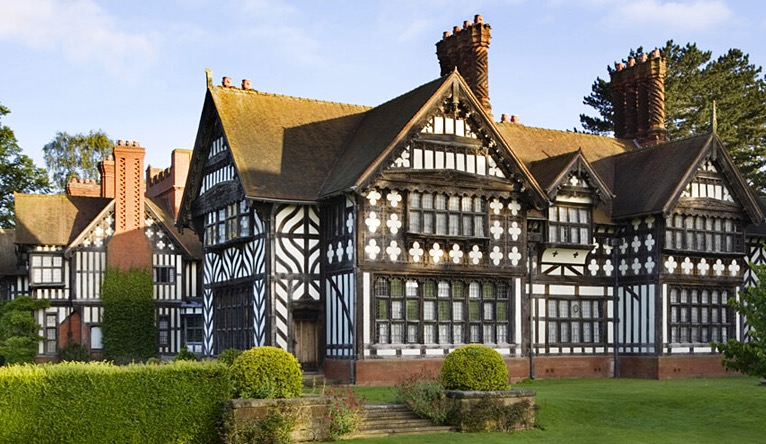 Walsall National Trust Association has ensured that an exciting new project at Wightwick Manor has gone ahead by donating £12 000 to the house. The old Malthouse has been converted into a gallery. This gallery will enable them to display works of art from nationally important collections across the country. They are starting with a 10 year partnership with the De Morgan foundation to display ceramics by William De Morgan and paintings by his wife, Evelyn.   The gallery is now open. Click on the image to read about the first impressive display. 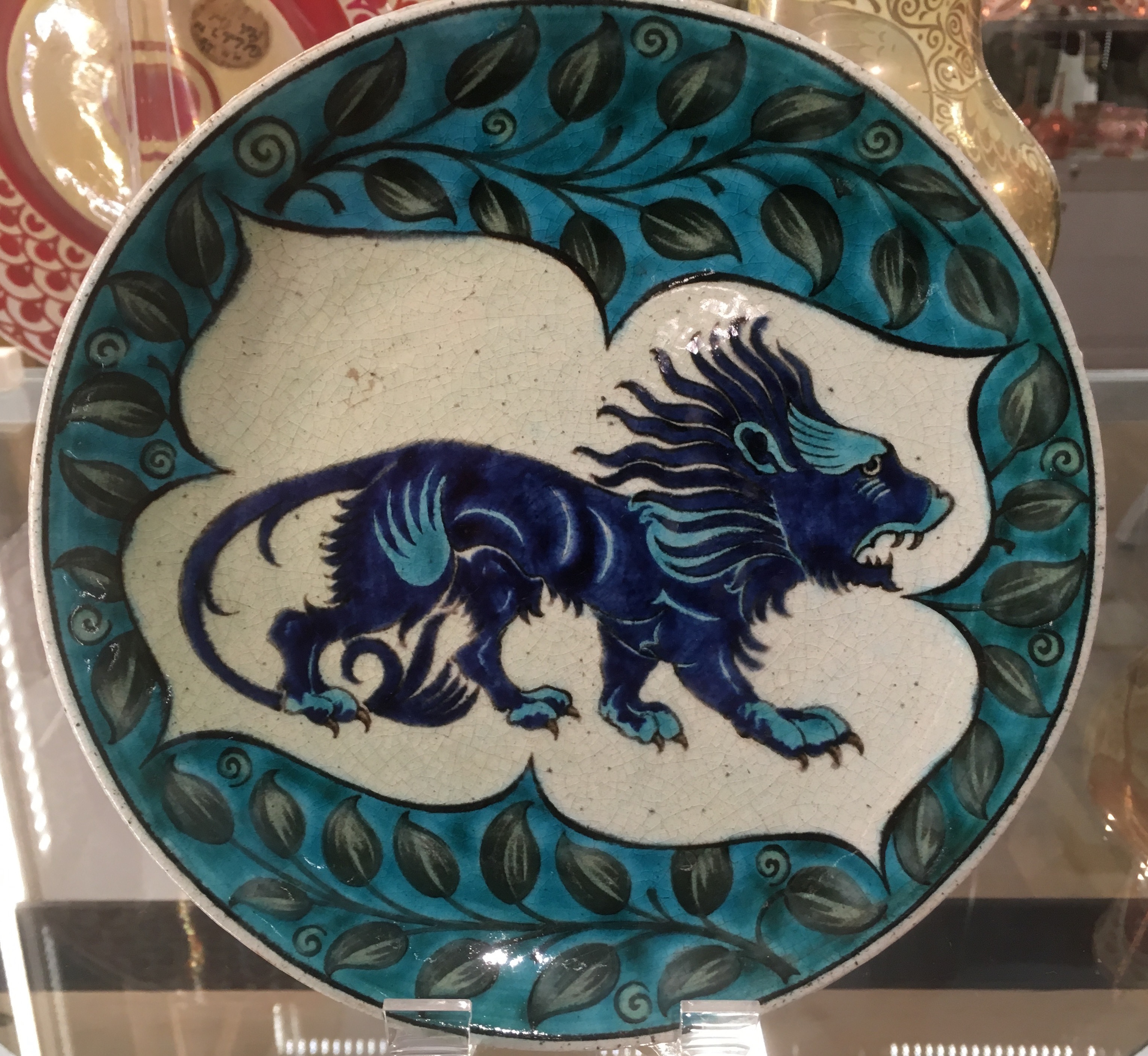 The total project cost is £120,000 but they have secured £110,000 from various charitable Trusts and £50,000 from the property’s own funds. WNTA has covered the final £10 000 and provided £2 000 to purchase 8 steamer chairs for the terrace, which was another item on the Trust’s ‘wish list’. The funds are part of a bequest from the estate of Miss Margaret Stanley, who was a member of our association until her death. Margaret’s gift will be properly acknowledged when the gallery is opened.

Another property to benefit from Margaret Stanley’s legacy is Charlecote Park. The gateway into Places Meadow has deteriorated over the past few years and needs replacing. The donation of £4 500 from WNTA will enable the gateway to be restored to the same design as the original.

Places Meadow overlooks the River Avon as it flows through Charlecote Park. Paul Smith, the Park and Garden manager, describes it as pretty, peaceful and productive. Following wildflower planting in 2015, it was featured on BBC’s popular programme, Country File. At various times of the year, a fine herd of Jacob sheep can be seen grazing in the meadow.

Ruth Webb, Business Support Coordinator at Charlecote writes, “Can I thank your members for your continued support. We are always delighted by the support that is given to our work from our local supporter groups and recognise that much of our work couldn’t take place without you.”

● Due to the current guidelines on social gatherings and uncertainty about the future, the management committee have decided that there will be no WNTA lecture meetings until January. Members should have received an e-mail, the text of which is on our Home page.